Join our community of dream chasers and get FREE SHIPPING on your first order!

Geoff Woods of The One Thing walks Bryan through a simple exercise that connects an audacious North Star goal to an actionable Next Step goal.

I had the great fortune to have Geoff Woods, Vice President at The One Thing on the Go Be More Podcast to share the strategies and mindsets used by billionaires to achieve success.

The interview was amazing and filled with gems, but this post is specifically about the last 10 minutes, where he advised me in real time how to set goals for Make the Leap.

It was uncomfortable, awkward, challenging…and profound.

For those of you who’ve read the book, I dedicate much of chapter 8 to the difference between North Star Goals–distant future goals that motivate us–and Next Step Goals–execution goals we focus on in the moment to get the most out of our activity today.

One of my arguments is that we put too much emphasis on North Star goals and not enough emphasis on Next Step goals. It’s the Next Step goals that actually drive success. (The below image is a modified version of the one in my book, using my Momentum Model to show the difference.)

That’s why I am primarily focused on self-referenced, Next Step goals with Make the Leap. I want to do high quality work, build a feedback loop, and trust that it will lead to future growth.

Geoff Woods challenged me to take that same concept but think much bigger. Much much bigger. Uncomfortably big.

And in a span of 8 minutes or so in my podcast, he fundamentally shifted not only what I thought possible for Make the Leap, but why it is achievable. I want to walk you through that process.

But first I need to introduce the concept of dominoes.

Dominos as a Metaphor for Success

The world record for dominos being lined up and knocked down is an absurd number. I believe it’s 4.3 million or thereabouts. And the amount of energy output when they all fall is…well it’s not a nuclear bomb but it’s a lot for dominos!

But here’s the thing. Knocking down all 4.3 million is as easy as flicking over one domino. The effort to knock over one sets in motion a chain reaction that results in everything else falling as well.

Great success doesn’t have to come from great effort, when that effort is placed at exactly the right point to generate enormous knock-on effects.

But let’s take it one step further. One domino can actually knock over another domino that is up to 50% larger. So if you set it up correctly, you can use one regular domino to knock over a domino hundreds of times larger.

Not only is the effort the same–just flicking over that first domino–but the results can be exponentially larger. 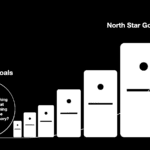 It Starts With Finding the Right First Domino

And the best way to set that cycle in motion is to identify the activities that make the most difference, that drive the most value, and make sure those are getting done as well as possible. They do this by asking the forcing question:

“What is the ONE thing I can do such that by doing it everything else will become easier or unnecessary?”

I referred to this “one thing” as a Next Level 80/20 activity in the book and it is an incredibly powerful way to think about your training.

The first domino is the Next Level 80/20 activity. The ONE thing.

Now let’s get to my uncomfortable part.

Think Big, Go Small, and Trust that the Dominos Will Fall

I told Geoff I was going to do this with him, and I’ll be honest, I thought I caught a glimmer of delight when we got started. Not unlike a lion spotting a weak zebra that strayed from the herd.

The first thing Geoff did was ask me to pick a time in the future and tell me what my goals for the book are. It was completely open-ended.

I chose two years out. He immediately cut me off. “No, pick a time farther out in the future.”

He then asked me for where I see Make the Leap being in 10 years.

Now, here’s where I need to be brutally honest. I’ve never really tried to envision where the book is in 10 years. It feels too far out, too uncertain, too pie-in-the-sky.

But he made me do it anyway.

I told him I want Make the Leap to be one of the handful of books that all competitive runners are expected to read. It’s 100% true, and yet it was really hard for me to say it.

He took it for granted, though. In fact, he challenged me to think even bigger. “What if your book was the Bible for runners? What if it was so successful you could not only live off the passive income but you could fund a global initiative to help people in underserved areas get world class coaching?”

I’ll be honest, I’ve never given myself the freedom to even consider that level of success. But that’s where he wanted to start.

Let’s make Make the Leap “THE book” for runners. 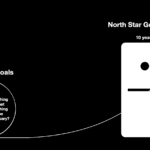 Step 2: Now bring it in a little

His next question just brought it in a little.

“Where would you have to be in the next 5 years to feel like you’re on track?”

I thought about it for a minute and said, “I need to be a book that all coaches are reading.” He seemed content with that answer.

Step 3: Bring it in again

“So what would you have to do in the next year to be on track for every coach to have it in their hands?”

I said I need to have a plan to reach them and to get the book into their hands in a way that I can afford.

I’m not happy with this answer but it was largely influenced by a conversation I had the day before where we talked about seeding the book to coaches in order to make bulk sales to their teams. So I was in the mindset of “give one to sell 20” when he asked me this.

He didn’t like it either and he flipped it on me. He agreed I need to know how many people that is but more importantly I need to have a plan to attract them to get the book. In his words: “a message so clear and so compelling that every coach in the world will want to get a copy.” 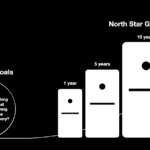 Step 4: Bring it in some more

Next question (you can see the pattern): “Great, so what would you need to do this month to be on track?”

I decided that clarifying that message is the number one thing I need to do.

Step 5: Bring it in even more

I said I need to brainstorm that message and get feedback from coaches.

“How much time would you need to do that? How many hours, sitting down, uninterrupted?”

I hemmed and hawed but came down upon two hours as my answer. He said that felt right.

And that’s my lead domino. 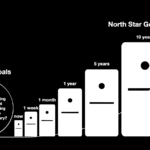 From North Star Goals to Next Step Goals

In 8 minutes Geoff pushed me to make a bigger North Star goal than I was comfortable with and then he connected it back to a clear, actionable Next Step goal. And not just any Next Step goal, but a Next Step goal that has the potential to lead me down a path that generates exponential gains.

As I said in the beginning, it was an uncomfortable eight minutes but it was a profound experience for me. Everything about it was consistent with my book, and yet we connected and implemented the concepts in a powerful way that I hadn’t experienced before.

You can count me as a convert. I will be using this approach in more areas of my life, and likely advising many others to do the same.

And I’m happy to say I’ve already started on that messaging, and reached out for feedback. 119 more months to go.

Want to learn more about Make the Leap?

– Read the Introduction to Make the Leap on the blog.
– Then sign up to my popular Think Better newsletter and get Chapter One: What is a “Leap?” for FREE.
– Follow me on Instagram and Facebook

Or if you are ready to think better, train better, and make the leap…Buy the book today!

Made with by Go Be More

Stay in the Loop

Join our community of dream chasers and get FREE SHIPPING on your first order!